As part of the Malawi Priorities Projects commissioned by the Copenhagen Consensus Center, Limestone researched the impact of various policies in the wake of the COVID-19 pandemic in Malawi. Limestone used the STUDIO model to demonstrate how different government stimulus spending approaches might impact economic recovery.

The analysis considers how the Government of Malawi might stimulate Malawi’s economic recovery by strategically prioritizing marginal spending toward commodities that will yield the greatest incremental value addition to the country’s economy. Limestone’s analysis was included in a policy brief submitted by CCC to the Government of Malawi to guide the design and implementation of the COVID-19 Socioeconomic Recovery Plan.

The results suggest that the Government of Malawi would see a substantially larger economic return from increases in domestic spending on healthcare and social work, public administration, and education commodities than the other categories regardless of the scenario, at least over the short term. The aggregate economic returns from spending in other categories is likely to be small or negative (i.e. one additional dollar of government spending would yield less than a dollar of value added to the economy). The reason for this is that many of the inputs used in domestic production of these commodities are imported, and therefore much of the spending on these commodities would flow out of the country in order to procure the inputs needed for domestic production.

This study builds upon the scenarios developed by Limestone scenario analysis Emerging from Crisis Malawi in 2025. The scenarios used survey data to explore four alternative paths which might unfold in Malawi over the next five years. The quantitative layer for these scenarios were then generated using Limestone’s Short-Term Under-capacity Dynamic Input-Output model (STUDIO). For more information about STUDIO, please refer to: 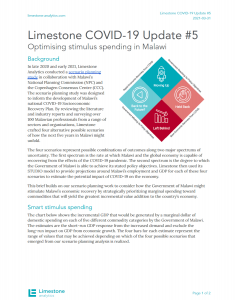 Limestone, along with @SDDirect_global, will be supporting @MCCgov with technical advisory services during the implementation of the Kiribati Threshold Program through the Gender & Social Inclusion Kiribati BPA.

During a recent project with the @gatesfoundation, Limestone examined the importance of Government-to-Person Payment Programs to increase financial inclusion, particularly for women.

Read more in @CGAP's blog written by some of our colleagues: https://www.cgap.org/blog/financial-inclusion-friendly-g2p-recommendations-stakeholders